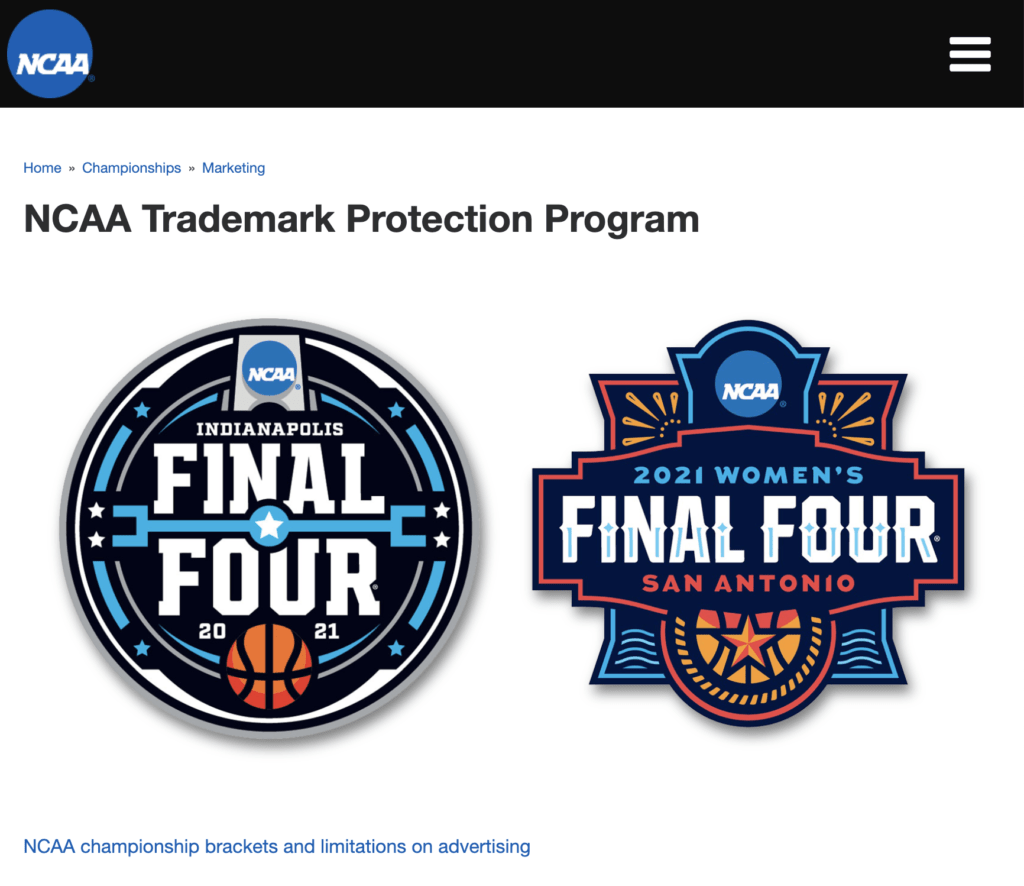 I have published several articles over the years about sports related trademark lawsuit and the protectiveness of famous trademark in sports marketing, such the NCAA’s MARCH MADNESS trademarks, the NFL’s SUPER BOWL trademarks, and even the International Olympic Committee (IOC) trademarks for OLYMPICS.

Since it’s March 2021, let’s highlight a recent legal trademark litigation case where NCAA sent a cease and desist letter followed by a federal complaint for trademark infringement against Ken Grody Management, Inc. and Vince Dixon Ford, Inc. over the defendant’s use of the term “Markdown Madness” to promote its automobile dealership.

In 2018, the National Collegiate Athletic Association (NCAA) took this federal action because a Southern California dealership got the idea of banking on the most famous intercollegiate competition in the world, the NCAA tournament, and the famous trademarks, brands, and logos associated with the “SWEET 16”, to generate some buzz for its dealership In weeks leading up to the FINAL FOUR (another protected NCAA trademark, see this blog for details about that trademark), and started using “Markdown Madness” in advertising.

The NCAA was not pleased. Particularly because it generates millions of dollars in revenue per year, with the highest earnings around the NCAA tournament season, to license its famous MARCH MADNESS, SWEET 16, and FINAL FOUR brands to various automotive related promotions. The Southern California’s use of “Markdown Madness”, according to the NCAA, caused a likelihood of confusion between with its MARCH MADNESS trademark and the dealership thus must cease and desist all promotions and activities related thereto, and pay the NCAA legal damages or financial damages in connection with trademark infringement.

The parties eventually settled out of court later that year.

It also publishes its list of trademarks, which include:

What entrepreneurs, trademark owners, and tech startup companies in software, hardware, or just a local service provided such as car dealer ship can takeaway from this is that trademark owners have a duty to police their trademarks, and enforce trademark exclusivity against third parties who are using their trademark (unauthorized use), or brands that cause a likelihood of confusion in the marketplace. Some trademark owners, including those in the highly lucrative worldwide sports and entertainment industry, including intercollegiate sports and professional sports, are even more zealously protected, as illustrated by similar zealous oversight, trademark enforcement, and brand exclusivity protection by entities such as the National Football League (NFL), or the International Olympic Committee (IOC), and discussed here, by the National Collegiate Athletic Association (NCAA) In and trademark owners are well advised to consult with an experienced sport marketing trademark attorney and intellectual property law firm in Los Angeles, New York, Atlanta, Miami, or Dallas, before adopting a major marketing campaign which may or may not be leveraging third party intellectual property assets, such as trademarks.